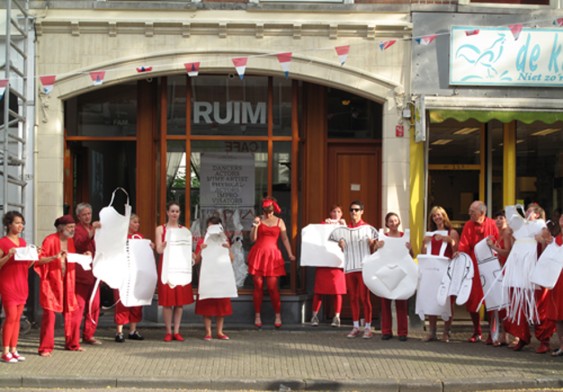 Papier fille. (paper girl) 2010
With ‘ Papier Fille’ I made a song, the song is about a girl with a paper body, a body that can be folded, torn, drawn on and she cuts her hart out.
The song then was launched the first time during the final of a 1month residency at FAM.RUIM. The project was an open call for everyone to come to take part in an audition/workshop, we would have 4/5 people a day that would first make drawings of a objects I had chosen, for example: bag, shirt, dress etc. (objects where also singed about in the song). Then I would ask them to make object in a big format (life size) out of paper. We would use these objects to improvise with. Movements and actions would emerge. With the movements we would create a total choreography on the song. The final of this project was to invite all the participants to come together and we would do the choreography together, dressed in red because I wanted to unify the group and we presented it on the street (inspired on a Flash mob) in front of the project space.

In the end I made a real selection for a performance that I made with 11 girls Called Les Follies, presented later that year (2010).