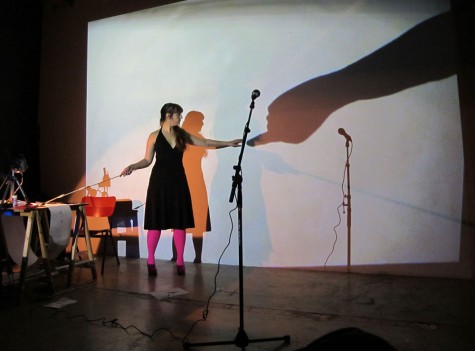 L'autre fille,
a performance that was presented at the Amsterdam FRINGE festival 2010. I had for the first time to create a setting and performance that was to be repeated 5 times. I called it L’autre Fille, as in the other girl. I worked with a songs, called ‘ La revolution des object’ (this was a song connected to an other performance I had created in 2009 for TENT in there 10 year anniversary. I had created a Show performance with 7 girls dressed the same, referring to revue’s from the 20’s ,they would dance and interact in my projection and on my song with house hold stuff.)
For ‘L’autre Fille’ I now tried to create a total show on my own, I saw the title ‘l’autre fille’ like the other girl trying to copy a performance show. By placing my self in a festival I created a setting with an audience.