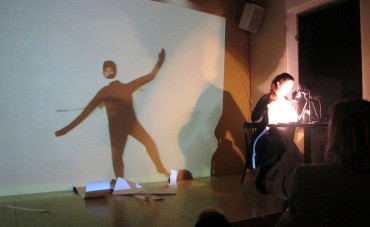 Entre Fille (between girl)
With ‘Entre Fille’ I was for the first time invited in a real theater in Amsterdam, as an ‘entre act’, between two theater shows within a festival. So the title became ‘Entre Fille’. I worked with paper, drawing, Interacting with projection and a song, here I also started using a mirror to have myself appear in my own projection and drawings.

(for this festival(object theater festival) I also created a series of performances where projection a drawing of a house on the real house and a real actor would come out of the house and interacted with me.

After these performances I was asked to do for a residency at STEIM (an electronic sound institute in Amsterdam) where I got to do a research on how to work with video and sound layers. I created together with a programmer a system that made it possible to film live and replay the video with sound on the spot. I presented a performance in Frascati during the event ‘Patterns and pleasure’. This meant I could sing while a video, created life in for hand, could play in an order while I would sing. A live video clip was created